Insecurities; everybody has them. Even the person considered to be the most beautiful, successful, talented in the whole world will have moments of self-doubt. Let’s take an example. Who is considered to be at the top of his game these days? James Cameron? Don’t you think that at times he doesn’t think that his movies might suck?  Sam Worthington? Kate Middleton? I strongly believe that at times they might be bothered by something on their looks, like a nose, skinny legs or something of that sort!

It’s like a dark cloud getting in the way of the sun. You can’t help it. It will appear, maybe when less expected. It might not even be about your looks but about a skill, or lack of it. It’s how you deal with it and how much it affects you that counts. In a society driven by materialism, vanity and narcissism, the existence of photoshoped celebrities with plastic surgeons on their speed dials, I fear, increases the number of people feeling bad about themselves. The extreme level of this phenomenon leads people to anorexia, bulimia or even depression. Unfortunately, nowadays finding people with low self-esteem is not that difficult to distinguish. They can be easily spotted at work or on the road, with their heads low, trying to remain invisible, hidden from the world. These are however extreme cases, but they are real nonetheless. 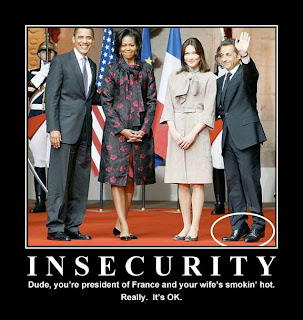 For me, the situation is not anywhere near that dire. As a normal human I have my insecurities. Sometimes these dark clouds appear while I’m at the gym. I have to admit that in occasions I feel I don’t belong there with the rest of these fit, good looking people or that my efforts are wasted and that I should simply give up. These thoughts come to me more frequent when I’m really struggling to do an exercise, I’m tired and people next to me do the same thing with more kilos, seemingly effortless. 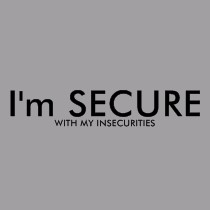 But then, I try to think that they do must have their insecurities of their own. I’m in the same gym, trying (struggling) but at least I’m there, doing the right thing. I don’t have a six pack and I can’t do pull-ups properly. My biceps and shoulders are weak, but at least my triceps and back are strong. What if I finish last (or next to last) with my running club? I might feel bad that they have to wait for me sometimes in big junctions or at the finish line, but at least I’m there. I will get better. I might have a little bit of a muffin top, but they are also called ‘love handles’! No one is perfect. I will accept the challenge and I will keep on going with my head high, smiling.