Where do I start? It’s been really busy the last few weeks.

First thing first, I’m on holidays next week and I really can’t wait. And I mean the kind of holidays where you really pack summer clothes, sun glasses and go to the airport to catch a flight for your destination. You must have guessed it, I’m going to Greece! I’m flying to Athens! I’m planning to see my new nephew and family. I’ll be staying over some old friends’ place for some days before JJ comes to join me the following weekend. Then, we’ll be staying in a nice hotel till we fly back the week after.

I kind of ‘spoke’ to my nephew last Sunday on Skype! He was looking at me with bewilderment. He had a hiccup, so you can say he was replying to the things I was saying. Then of course he shat himself and the communication came to an end. Rude! 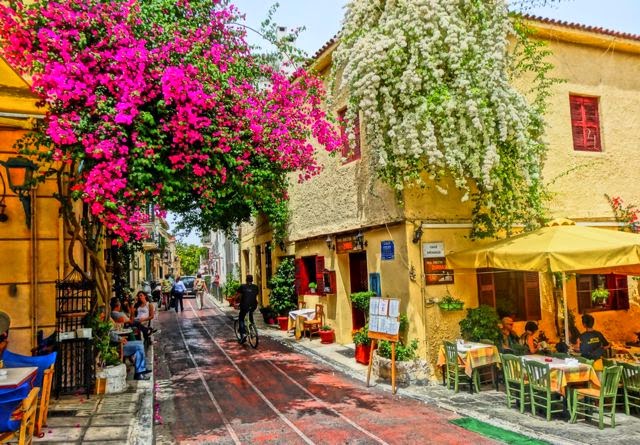 I went with JJ to a baby store to buy him gifts. I assumed that my nephew must have everything for now. So, we tried to think ahead and buy him winter clothes or stuff he might use later this year. We might have gone a bit overboard and got him lots of things. But we are the weird/exotic uncles from abroad. We got him a fluffy doggy, jumpers, shoes, even a towel with a hat in one corner with bear ears! It looked so cute! That boy will be so spoilt when he grows up.

In any case I’m so excited to see some of my old friends next week. I have been living in London for years but I've always kept in touch with some people I knew even since high school, even earlier. These are friendships I believe will last a lifetime. Similarly, I’m planning on seeing my family. My parents will specifically drive to Athens to see me. OK, I admit that seeing their grandson also plays a part in their decision to come, but I hope that part of them wants to see me too. 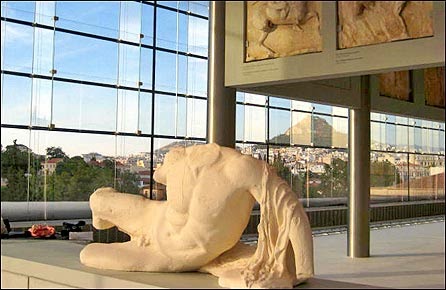 I suggested to them that’s it time to get to know JJ as well. I thought it would be a great opportunity now. The arrival of the new member of the family is such a happy event that puts them in the right state of mind. And we could only just go for a quick coffee, even just with my mother since I know my father is the problem. But alas, they ignored the invitation. Since I had told them which days I’ll be in the town and when JJ's coming, they decided to be in Athens when he’s not there.

Although disappointing, I knew that was coming. Some old ideas and bad habits are difficult to break. What I’m thinking of doing now is inviting my mother to London, just her. She hinted at some point that she might come to help us out in the refurbishment of the house. She wouldn't leave my father alone for many days, they’re inseparable, but at least she could come for a short period of time.

My weekend in pictures 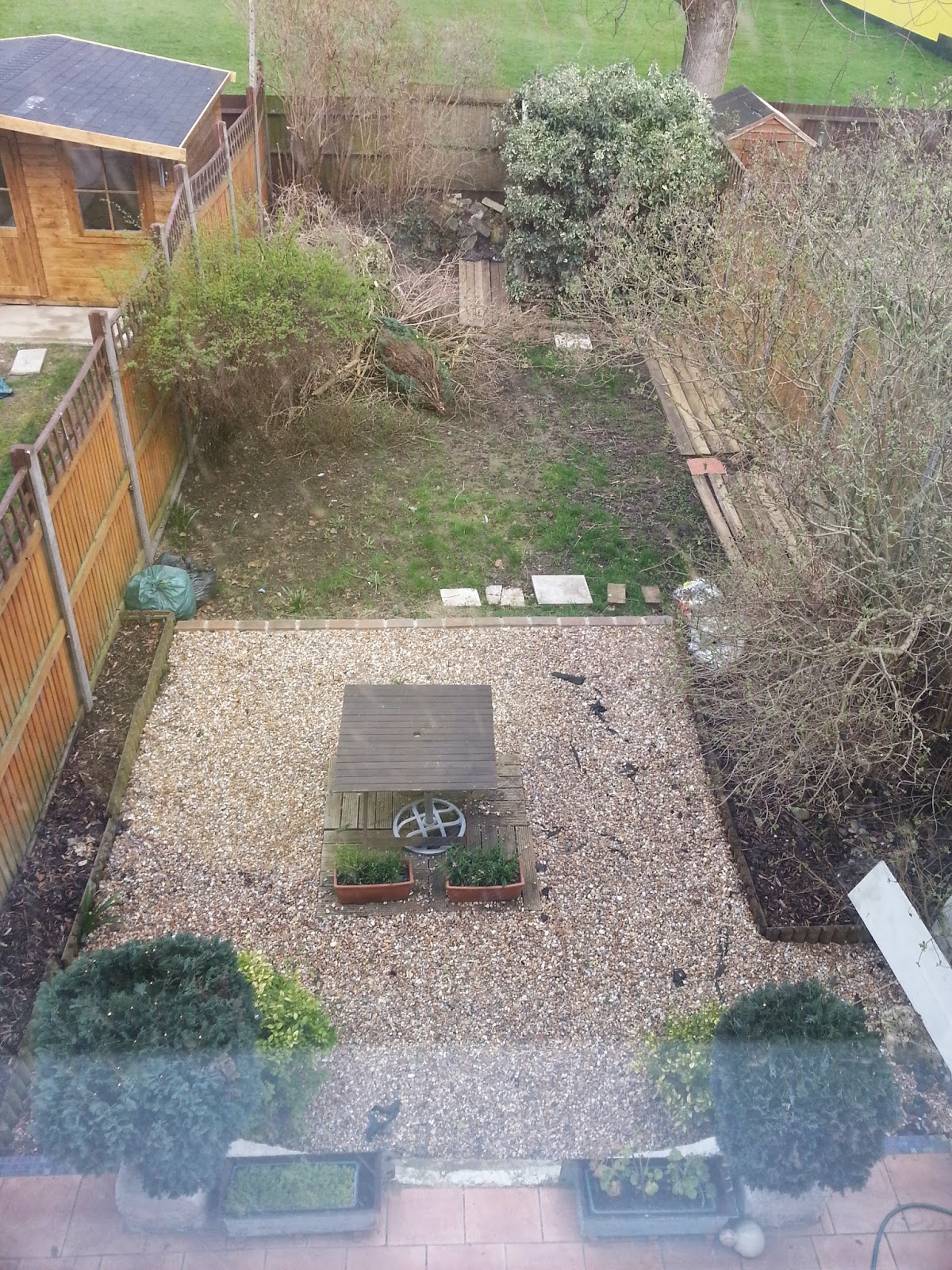 That's the before picture, even after we've done a little bit of clearing out. The shed is hidden on the back right corner under that ivy.

Our garden was generally overgrown and messy when we bought our house. It was a high priority to put it in a more friendly state since we both like staying outdoors and our bbqs! JJ is South African after all. Bbq in in their blood. After managing to clear out weed and unwanted plants, JJ put lots of effort during his week off from work to tidy it up. So, Saturday I tried to help as much as I could. 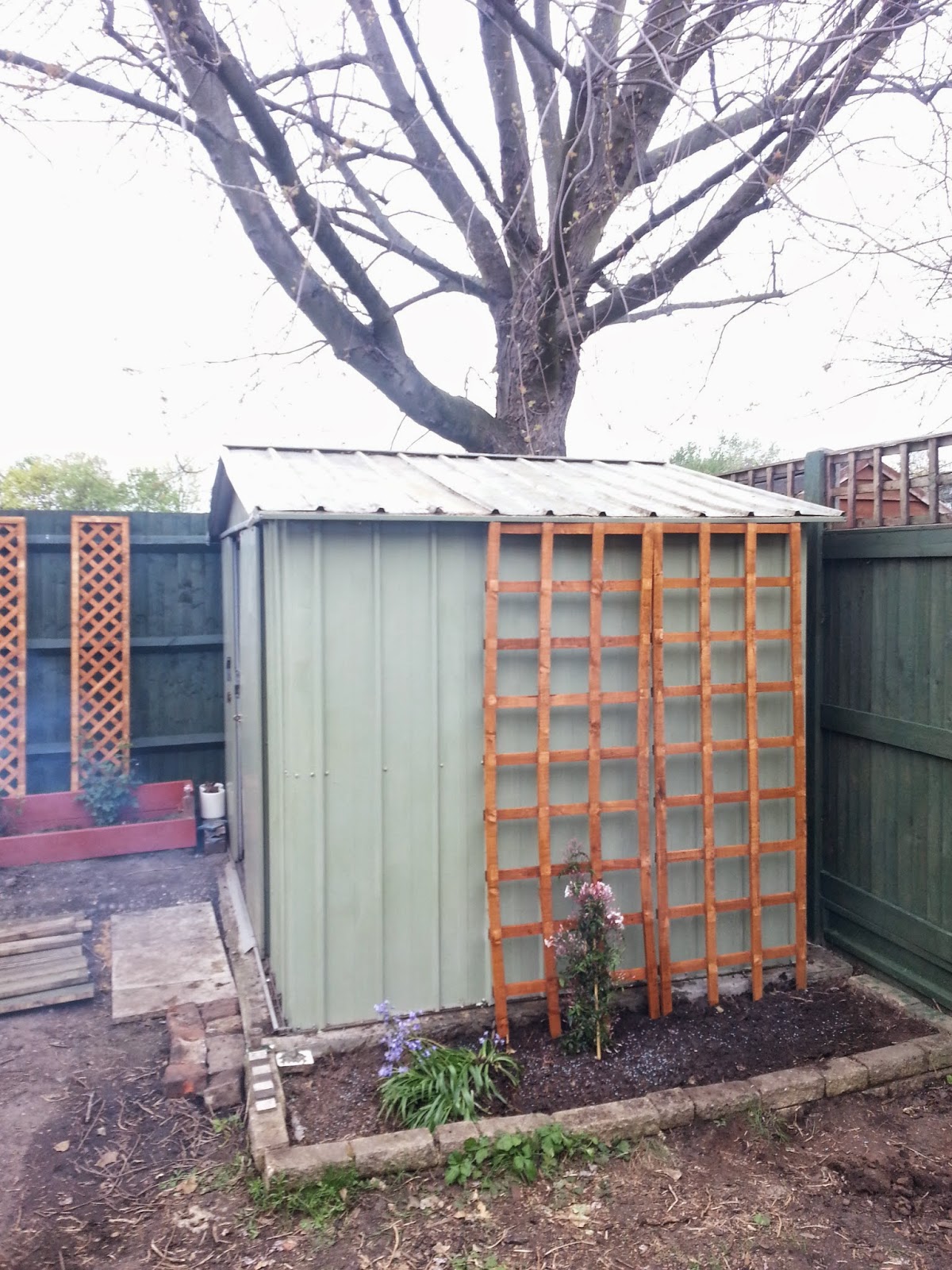 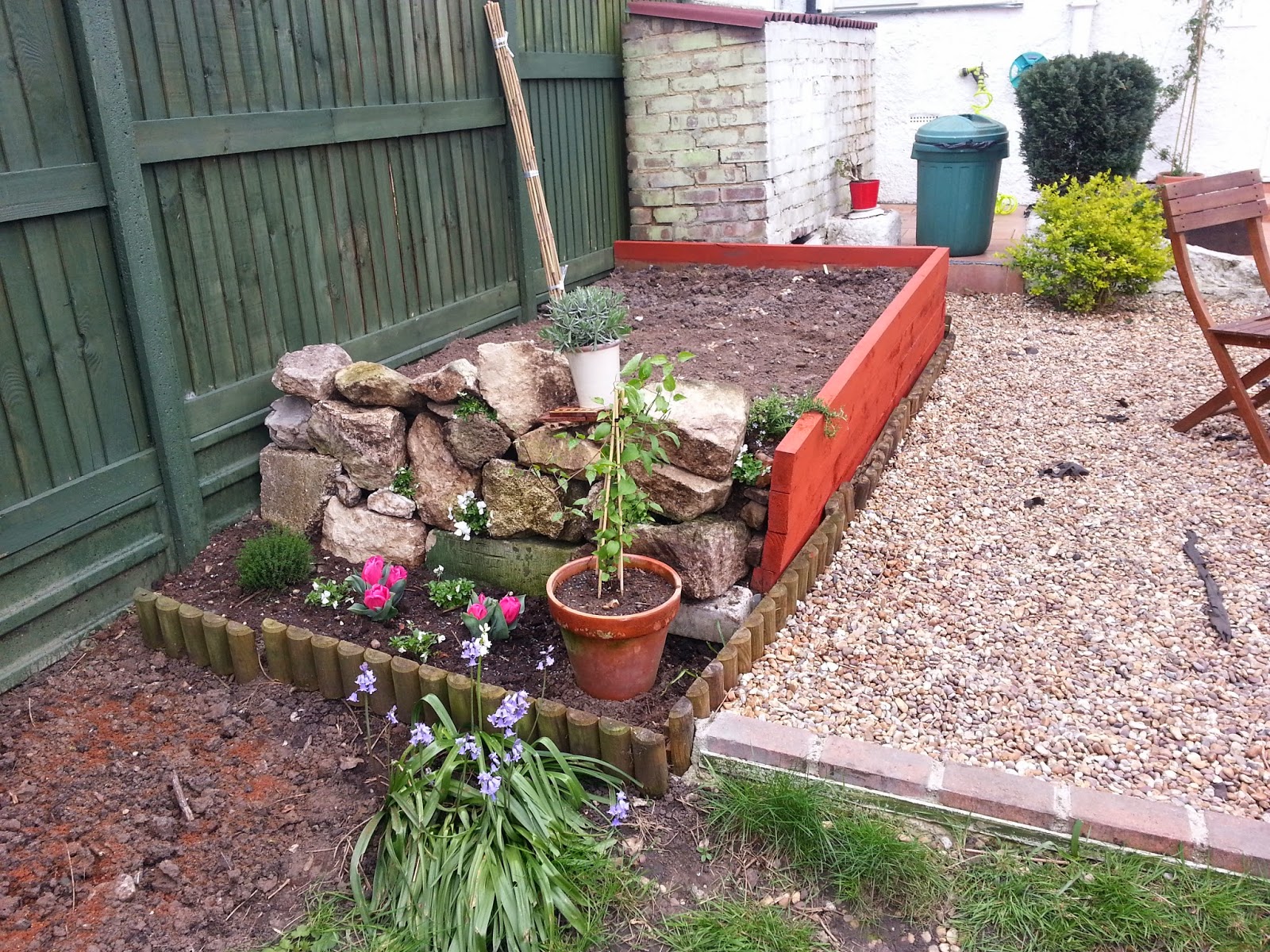 Creating new plant areas in the garden. It will look so great as the plants will grow

We managed to clear the small shed from all the ivy that was covering it and paint it again. It now looks clean. We planted a jasmine plant in front of it. Changing the look of the shed made a huge difference on how the garden looks. Hopefully our plants will grow and the garden will look even nicer. We might even get some vegetables this year.

Sunday was the Virgin London Marathon. The weather was brilliant, at least for the spectators since I assume it was a bit too warm for the runners. We got up early and headed to the city centre. We found a spot close the Monument in the City and watched them pass for at least a couple of hours. 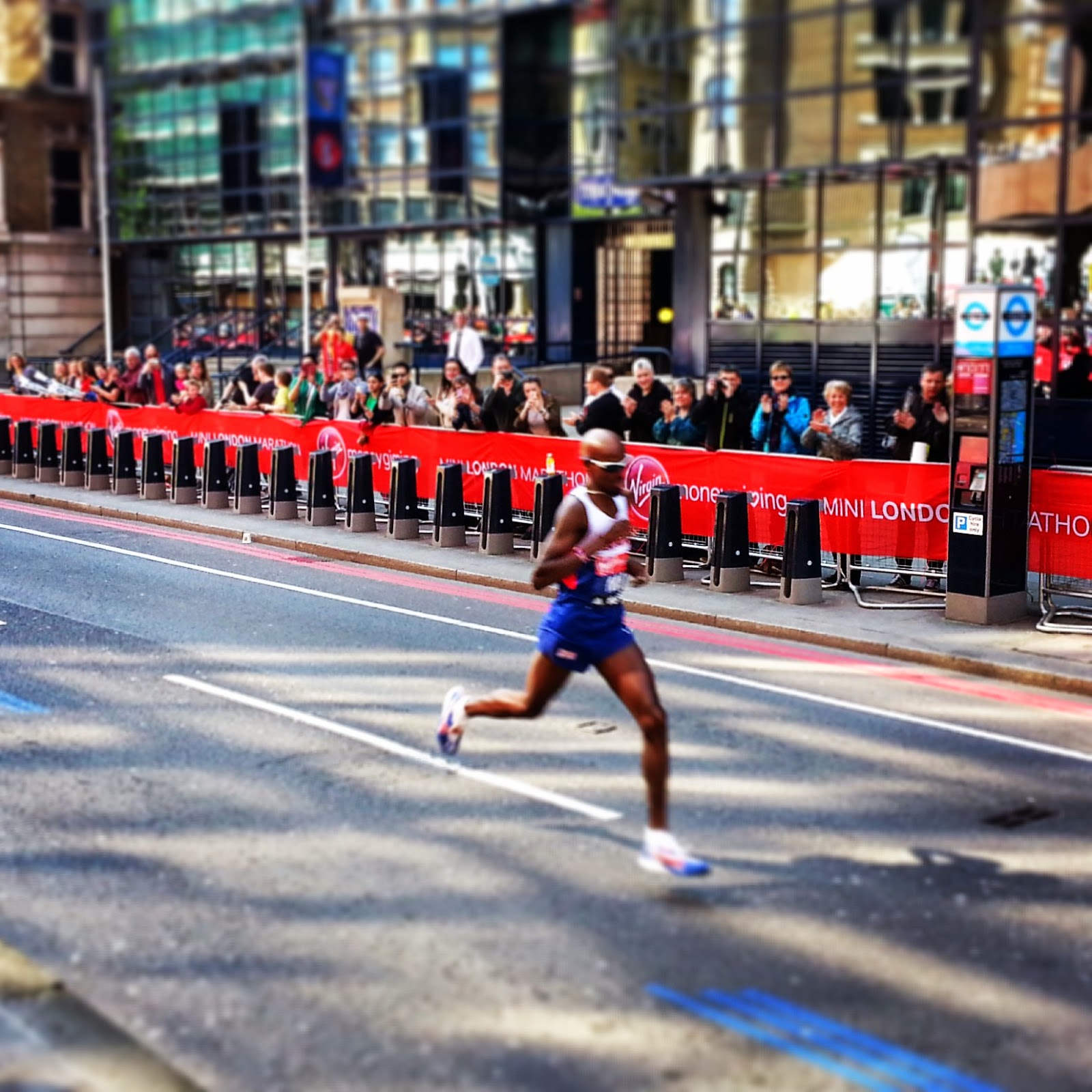 To me seeing people run like that is so inspirational. It signifies the power of the mind over the pain and the dedication some people can show over a cause. The atmosphere is so jovial and the sunshine made it all so much nicer. 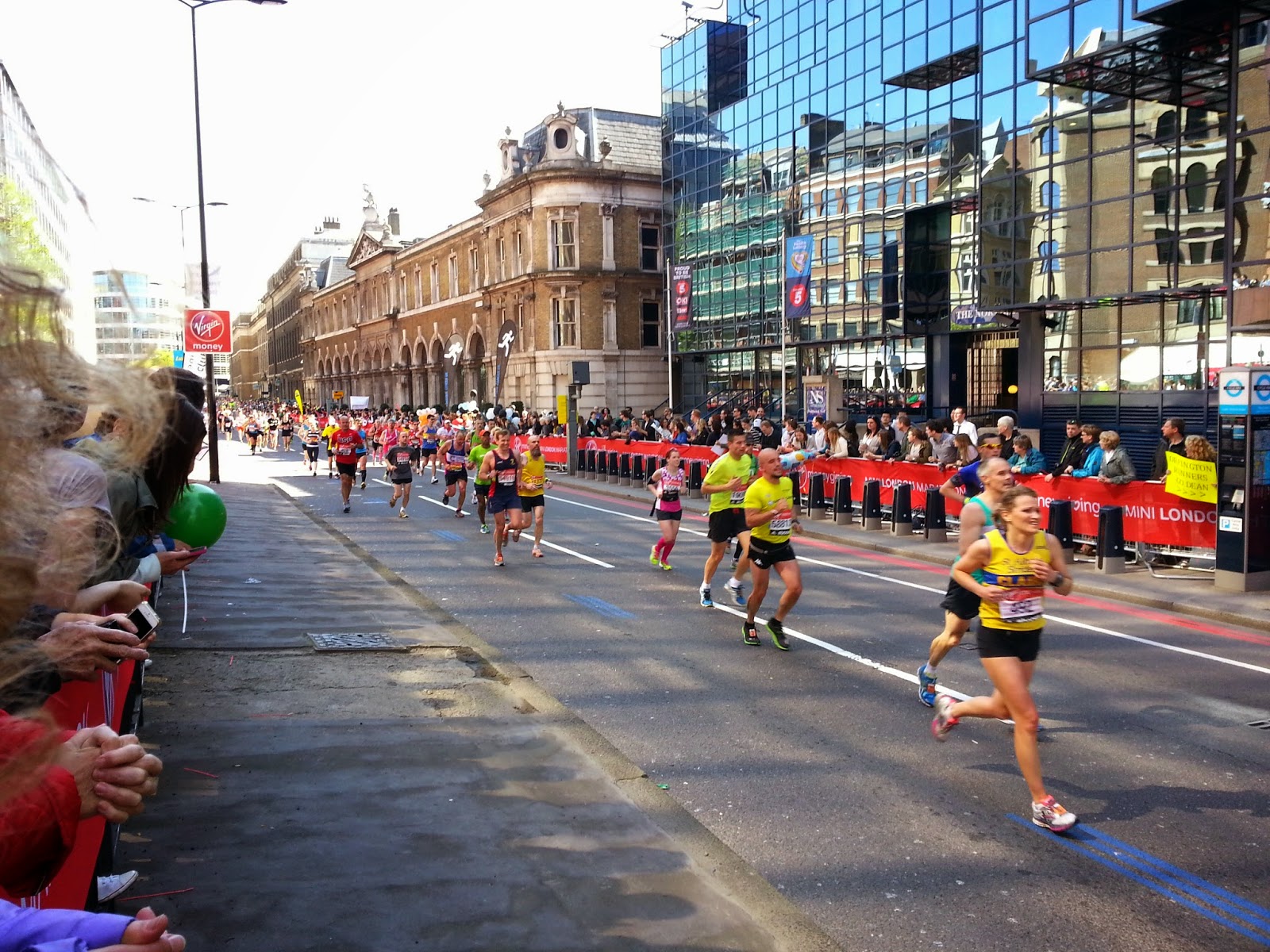 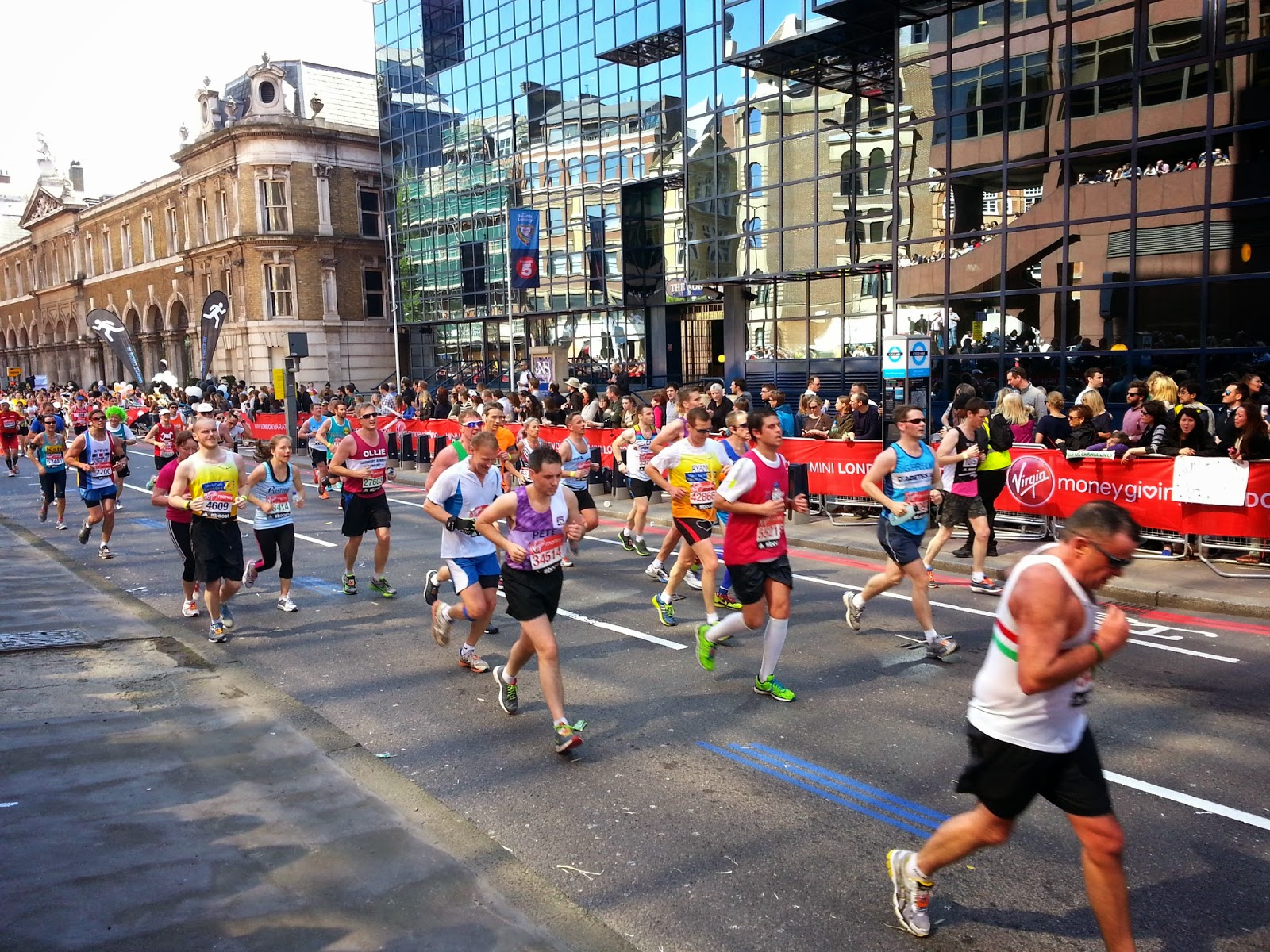 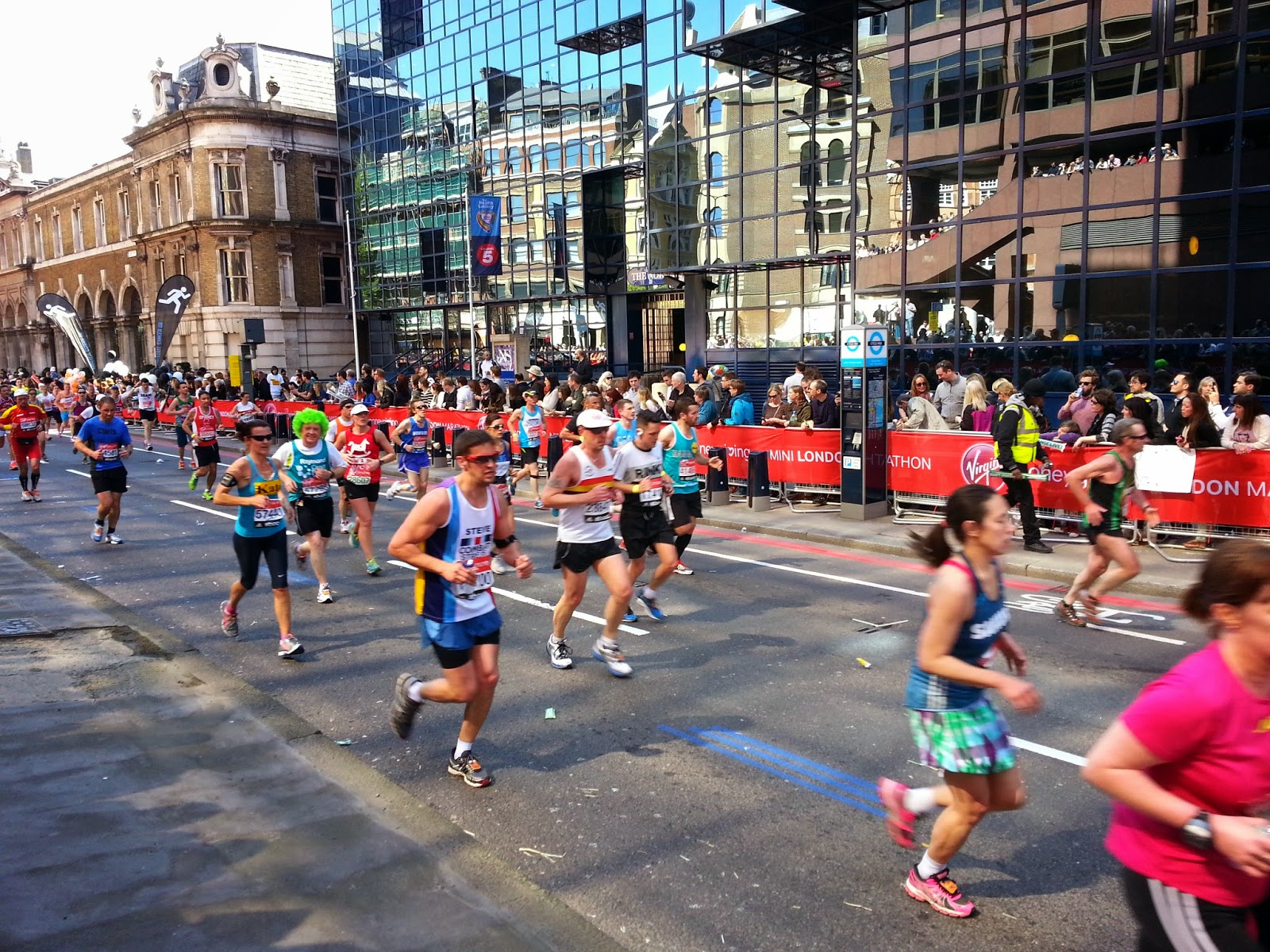 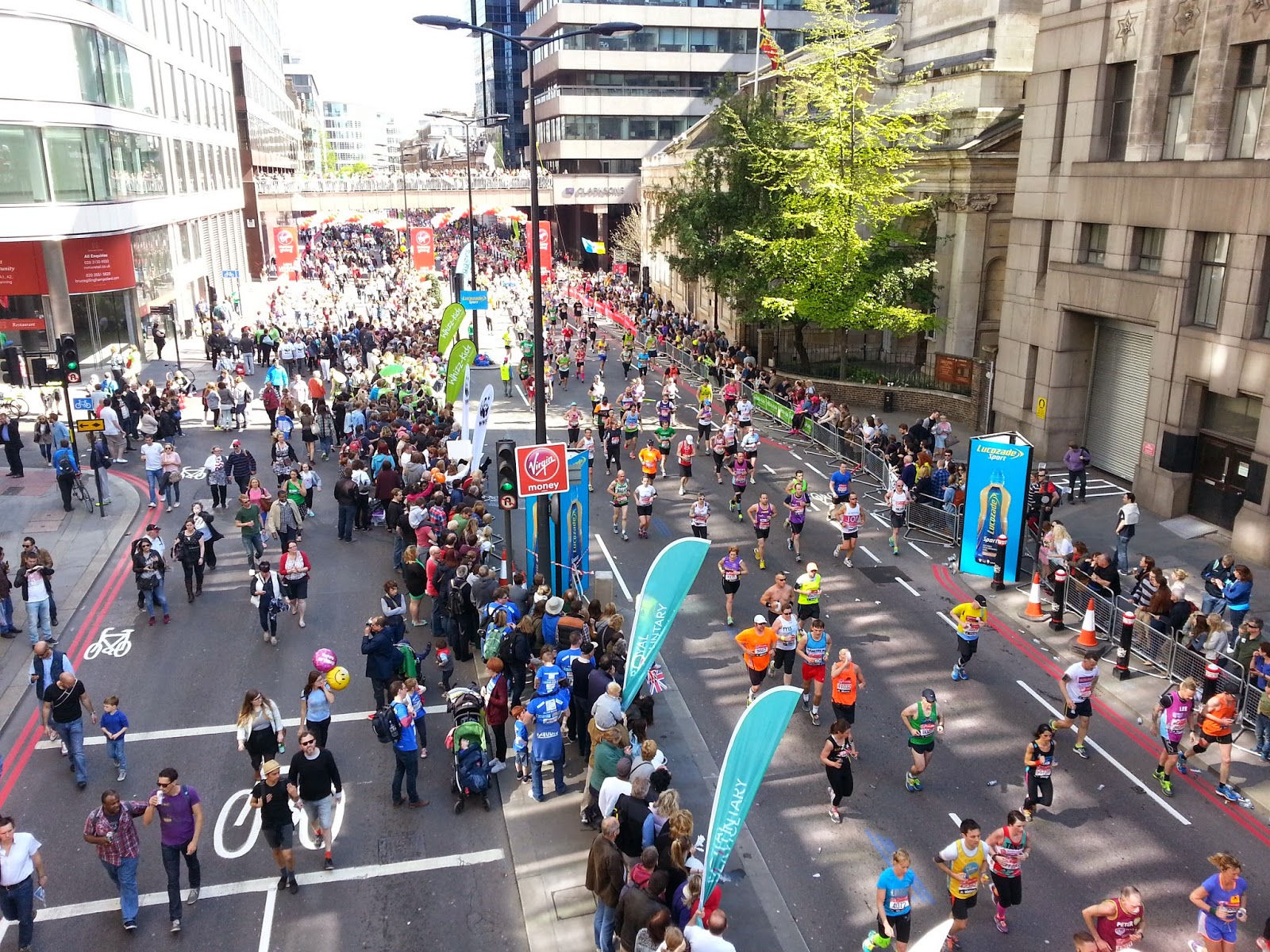 The rest of the runners

We've been adopted by a cat!

"Here, in my bizarre little world, lots of things happened during the last few days! I was thinking of sharing them with you in a big ‘news update’ post, but I wouldn't like to diminish their significance. So, I’ll give them to you in parts."

The last couple of weeks, numerous times, a cat came to visit. Almost all those visits had the same pattern. He / She would come right outside our back garden door and meow. (I think it's a she). She would then wait patiently for us to open the door and then followed us inside. Being really close and friendly she would wait for something to eat. Every single time, she would eat like previously famished. 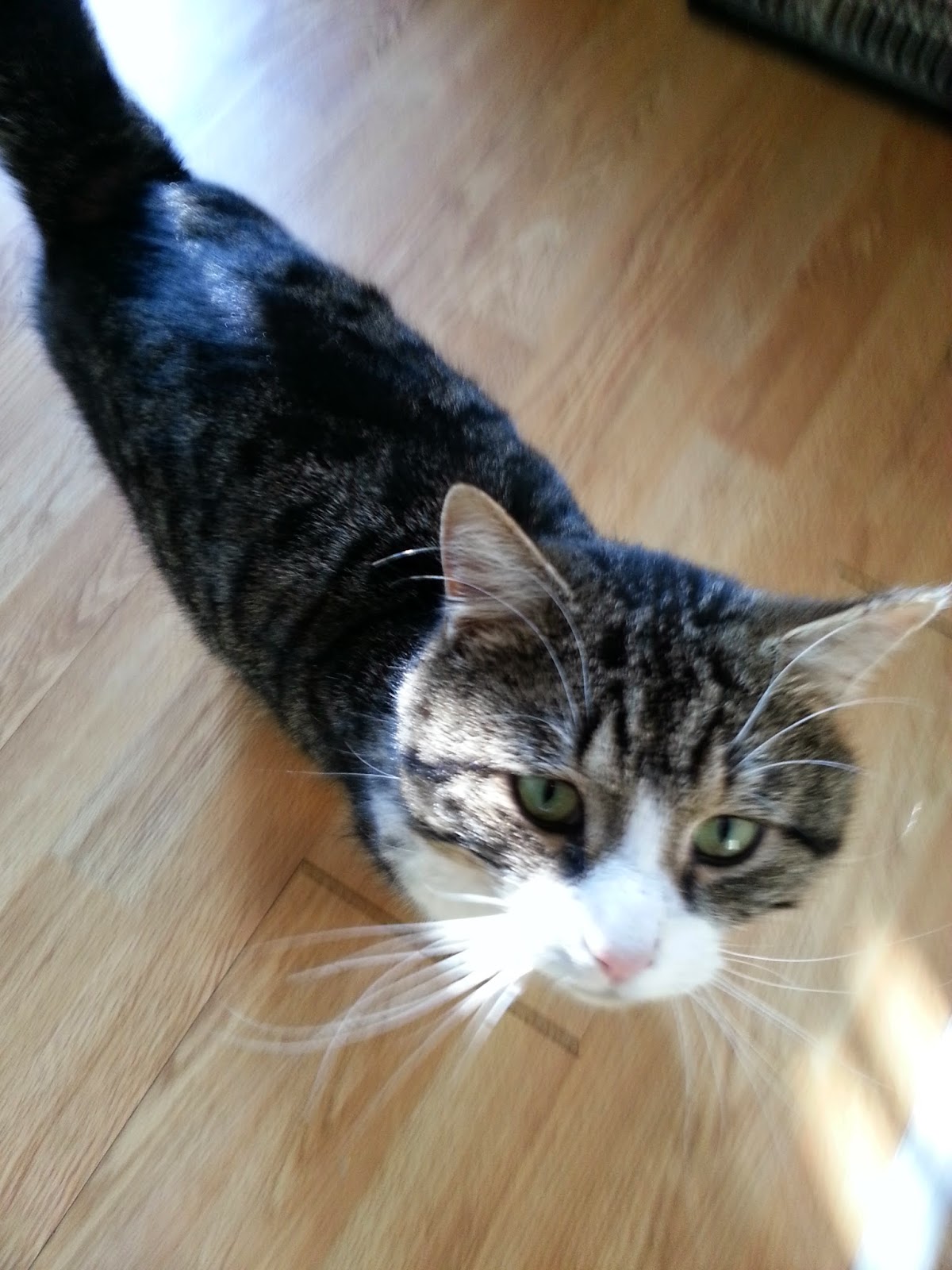 The "where's my food" look

Then, according to the weather, she would either stay on the door mat next to the open door, climb on a sofa or chair, or go outside and sit on dirt and sleep. After sleeping for a bit, there would be the second round of food. 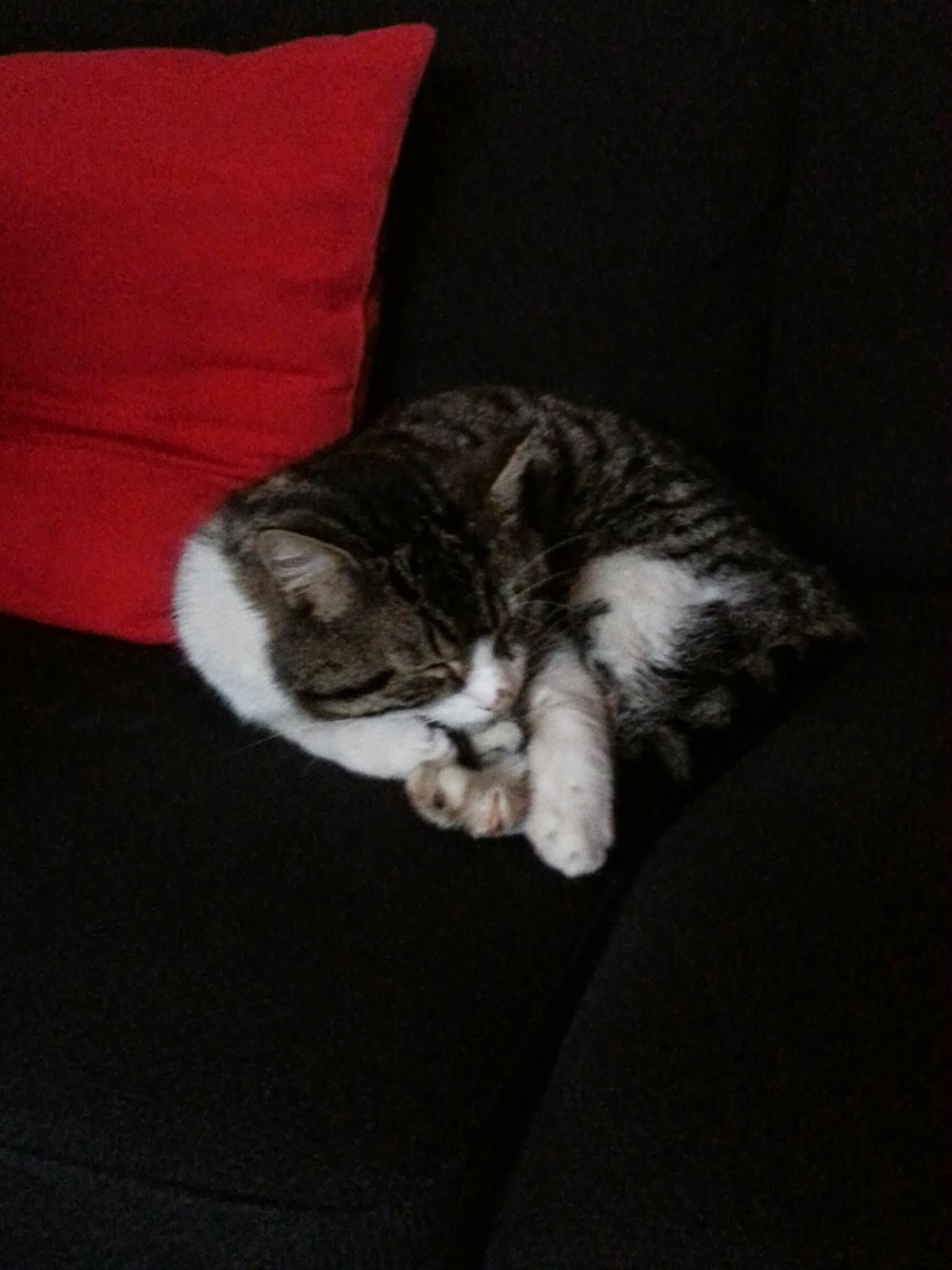 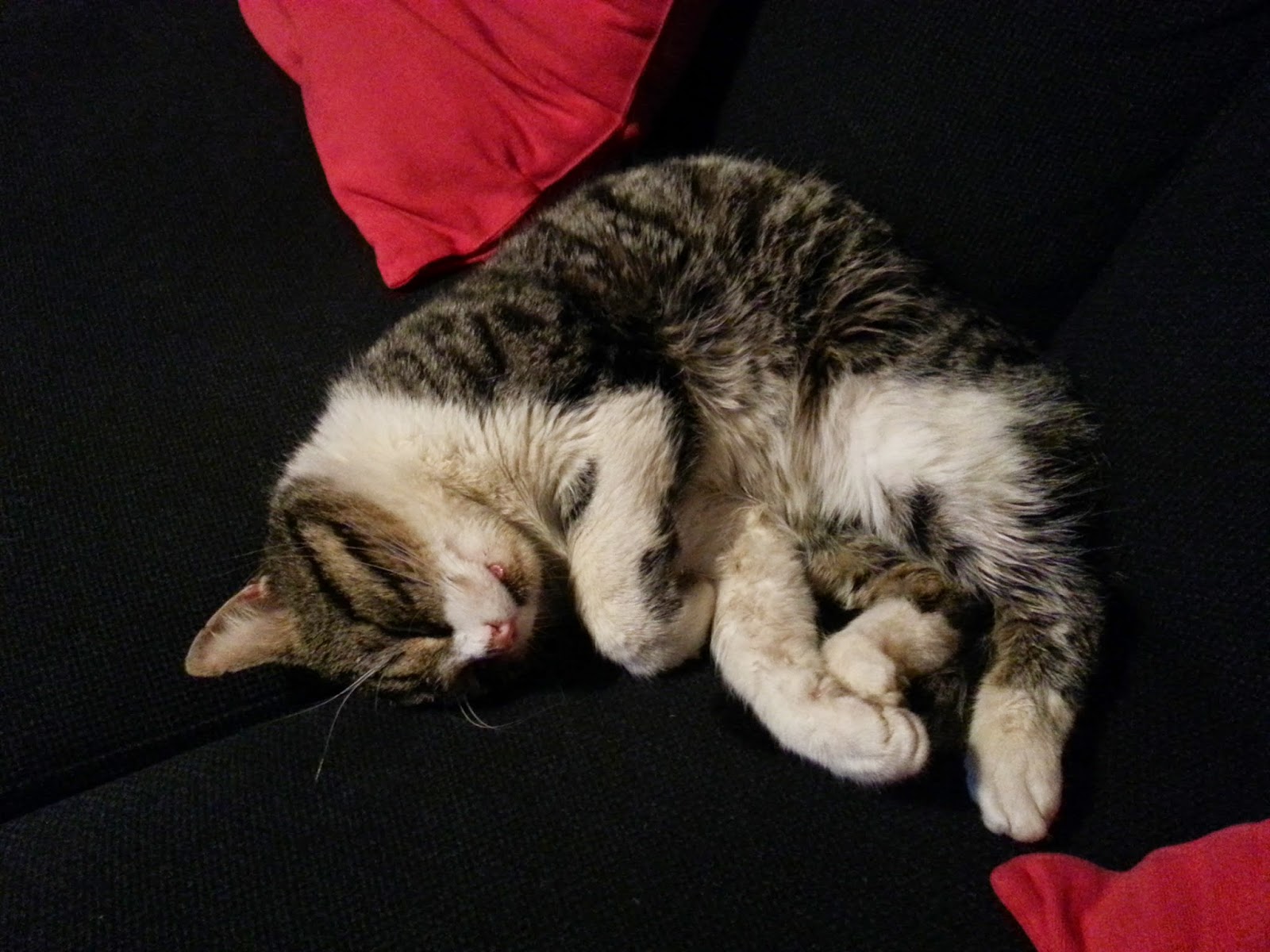 Finally, all satisfied and happy, she would go back to sit in front of the door and meow, waiting for someone to open it for her to disappear over the garden fence. A few days later she would return. The cat doesn't have a collar, but looks really nicely home trained. She happily purrs when we’re caressing her, although gets a bit annoyed when touched while eating. She doesn't scratch nor bite though. She’s adorable… 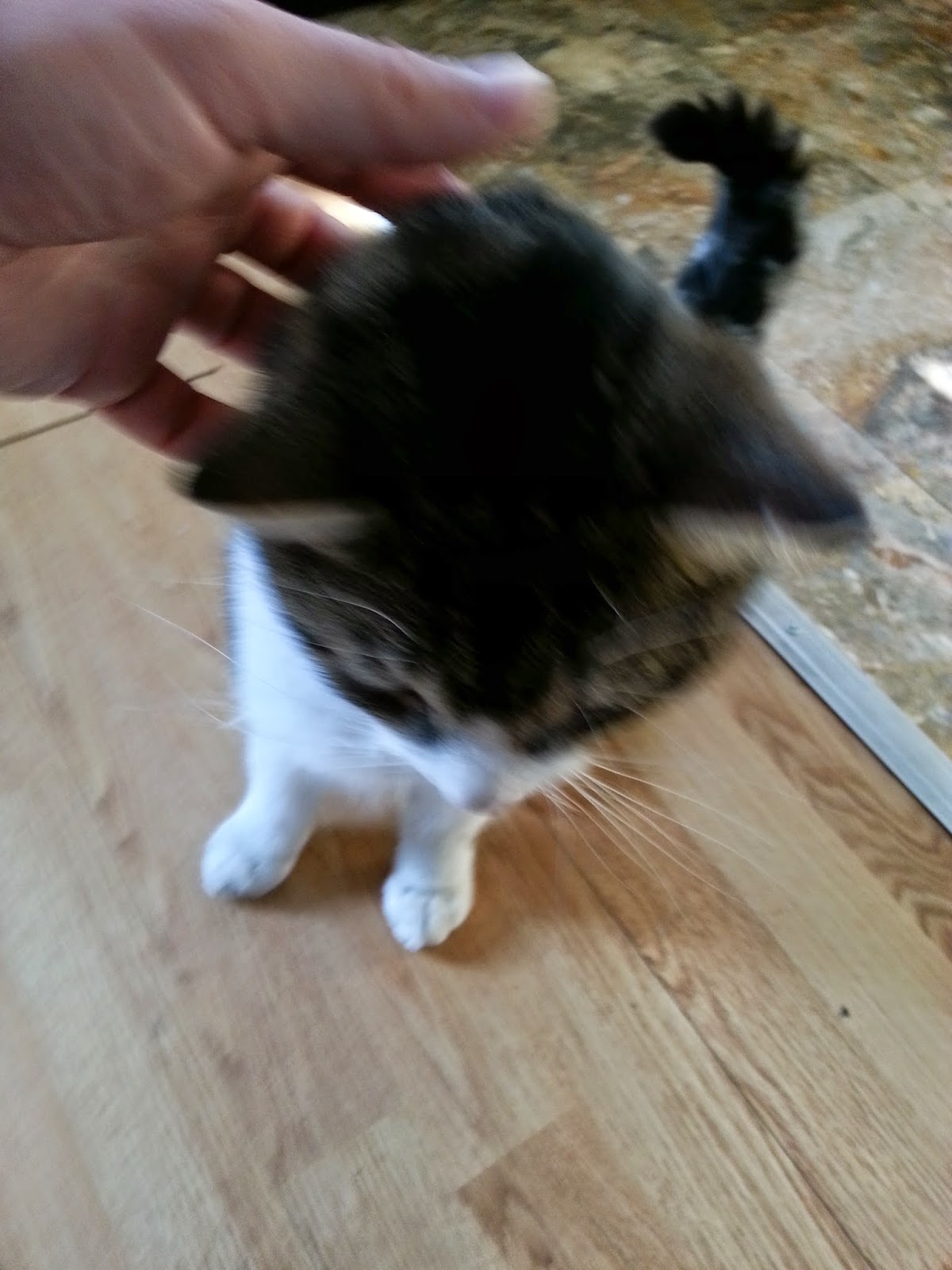 Today, I learnt that JJ tried to bathe her!!!! She really needed one. But I wish I had a camera to document that! So, I’m not sure whether she’ll be back. Although, to be honest, I think that when she’ll be hungry next, she’ll be back…
Posted by Nik_TheGreek at 15:30 6 comments:

New arrivals! A baby is born

Here, in my bizarre little world, lots of things happened during the last few days! I was thinking of sharing them with you in a big ‘news update’ post, but I wouldn't like to diminish their significance. So, I’ll give them to you in parts.

I woke up on Thursday, the 3rd of April, to see an email from my brother that his baby was born! The baby was due later this month, around the 20th, but he decided to arrive early. My sister-in-law had some minor discomfort during Wednesday evening, but not something major. So, she decided to stay in bed and rest. Around 2:20 am her water broke. So, they drove fast to the clinic and by 5 am, they had a baby! From what I know, that’s quite quick!

She and the baby boy are both healthy. He was born around 2.8 kg which is a bit small, but his appetite is quite strong and he’s doing well. Since Sunday, they went back to their place. I've talked to both of them and my parents who are in Athens to help them out. I don’t think you could keep them away anyway. I’m visiting them with JJ the beginning of May. We had booked our tickets in advance and I had in mind the original due date of the 20th. I was even told that fist babies sometimes come late anyway.


I've received a dozen of pictures which I can’t share with you, since it’s not my baby and there are child protection regulations. So, instead I’m leaving you with a picture of the baby in Roger Rabbit! Our baby is extremely adorable and cute. Believe me when I say that, I'm a totally impartial judge. 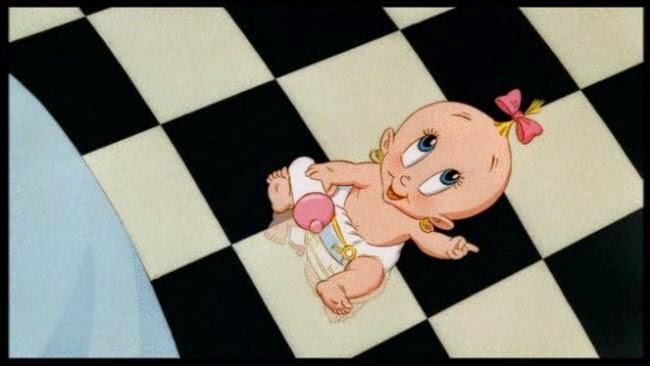