It’s been almost a month (minus a days) since I started my new eating habits. It’s been going generally well and it’s been much easier since JJ is doing a diet with me. I’m proud to say that the amount of delicious bad stuff like red meat, bread, cheese, chocolate, fried stuff and sugar I had during that month was kept to an absolute minimum. When you start looking for it, you can see that substances like sugar is basically everywhere! You can’t help it. But at least I've stopped the full fat cappuccinos with extra brown sugar. I used to have 2 to 3 a day. That should count, right? Overall I've lost about 5 kg in the last month, which I have to say I'm quite happy with. Now, my BMI is 24, down from 25.7, although I believe that the whole BMI as an indicator is a bit flawed. And that was only the first month.

On another medical issue, since my half marathon last March I've been having some issues with my right knee. I noticed it during my first recovery run after that race. I went to a physio and he said I have ITBS. It has to do, I assume, with the amount of running I do over tarmac, the sudden increase of mileage and maybe lack of post running stretching. Since then I tried to rest it but had to keep on training since I have another half marathon this Sunday in Hackney (RunHackney). Unfortunately the pain didn't go away and I had to cancel my race for this Sunday. I’m a bit disappointed because I would have ran it with JJ and it would have been great to run between the buildings of London’s Olympic Park. But alas, I won’t. At least I’ll go take photos and cheer for JJ and another friend who’s doing the same race. I’ll try to do it next year. At the moment I’m waiting for NHS to be properly referred to a clinic to get treatment.

So overall I can say that dieting is going great but exercising not so well. At least I still have my personal trainer at the gym. 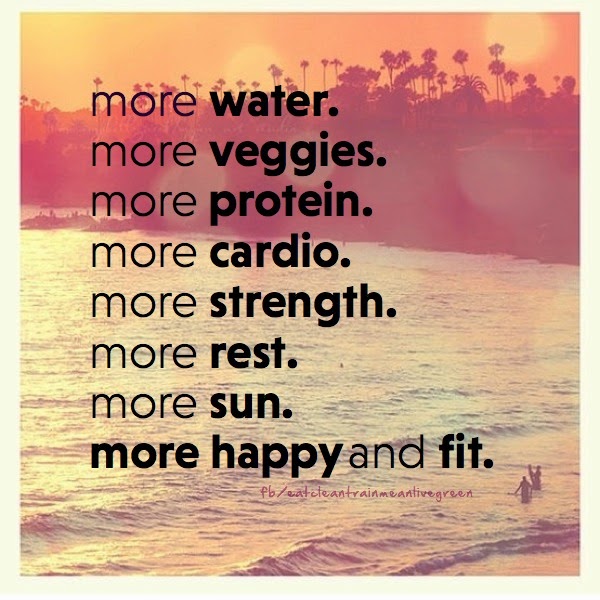 Not sure about the sun during the English summer, but the rest...

Changing subjects, I can also now say that I became an IT team leader! I used to belong to the team that I now lead, so I have experience of what we do and how. However, I've never had a similar position and it might prove challenging, but at least for the moment it’s going well. Although I have noticed a couple of days ago some grey hair on my ‘fringe’. Could they be new?

Anyway, I’m at the process of recruiting for my old position in the team. That is way more time consuming than I thought it would be, but can at least be fun. I can now easily say how NOT to write a CV. The things I've seen… For example starting your CV by demonstrating your hobbies is not a very good idea! Is that the most important thing you can offer to the role? Especially if your hobbies are online or ‘live’ poker! Yes, these are genuine pastimes (who am I to judge?) but at the same time if they are the first thing I read about you, I can’t help but think ‘possible gambling problem’. At least he didn't add porn or illegally downloading copyrighted material. Adding that you've worked for a serious IT company for only 9 whole days including a weekend, is also not a good personality indicator.

Living with a dog

The last couple of weeks have been quite interesting. As I mentioned in the past, I never had a dog, but some cats who we kept for years living in the garden, outside my parents’ house. So, I didn’t really know what to expect, but I had prepared myself for the worst. 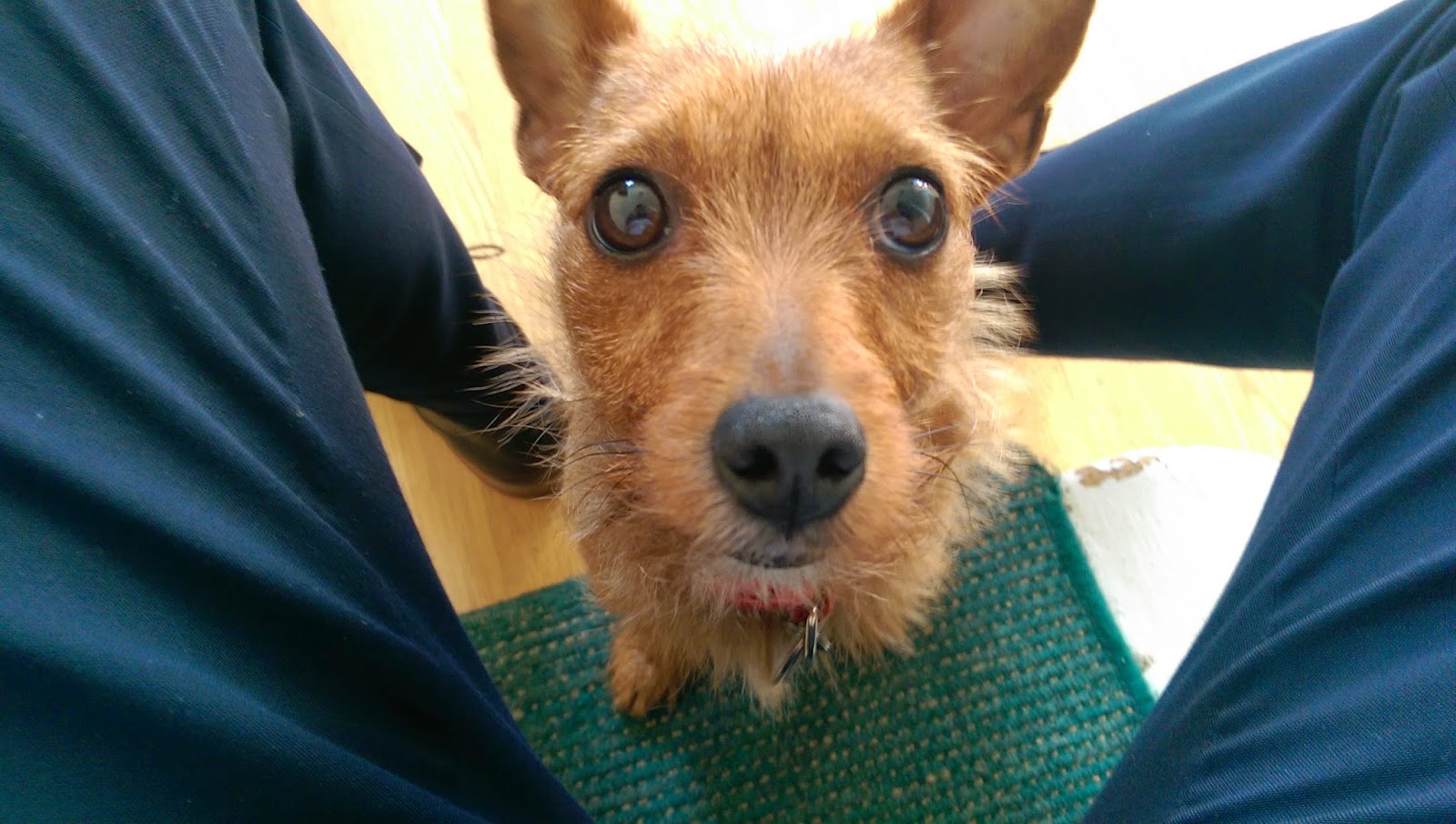 On the contrary, Penny has proven to be quite a surprise. We didn't have any chewed shoes or furniture. She’s not begging for food when we eat and gladly welcomes other people, children or pets when out and about. She doesn't bark much and happily sits on her cushion napping or observing what we do (most of the time). She was somewhat house trained on her previous homes and we didn't have to do much. She also does this ridiculously cute thing of standing up on her back legs and moves frantically her front ones in the air! It’s adorable. 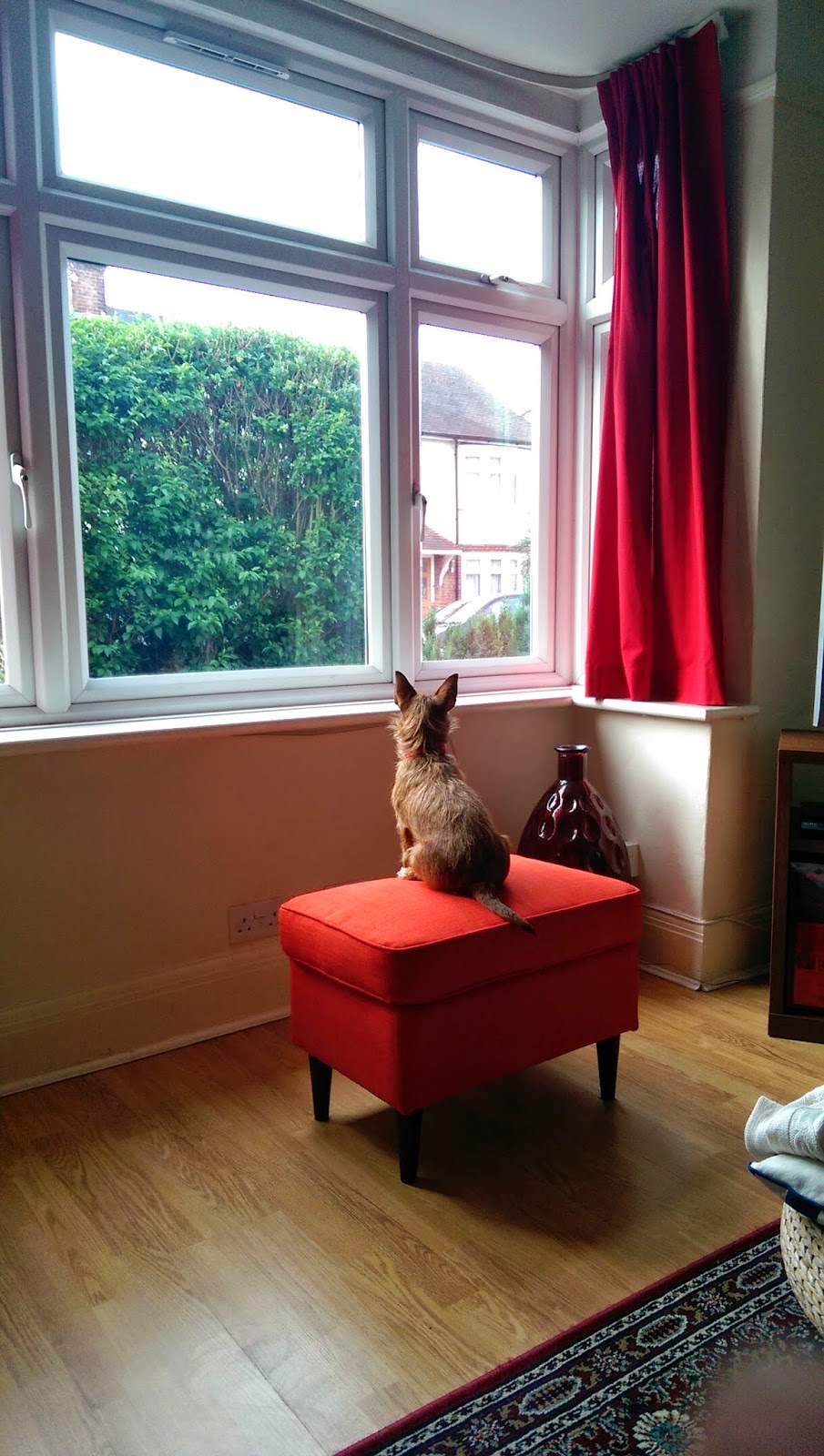 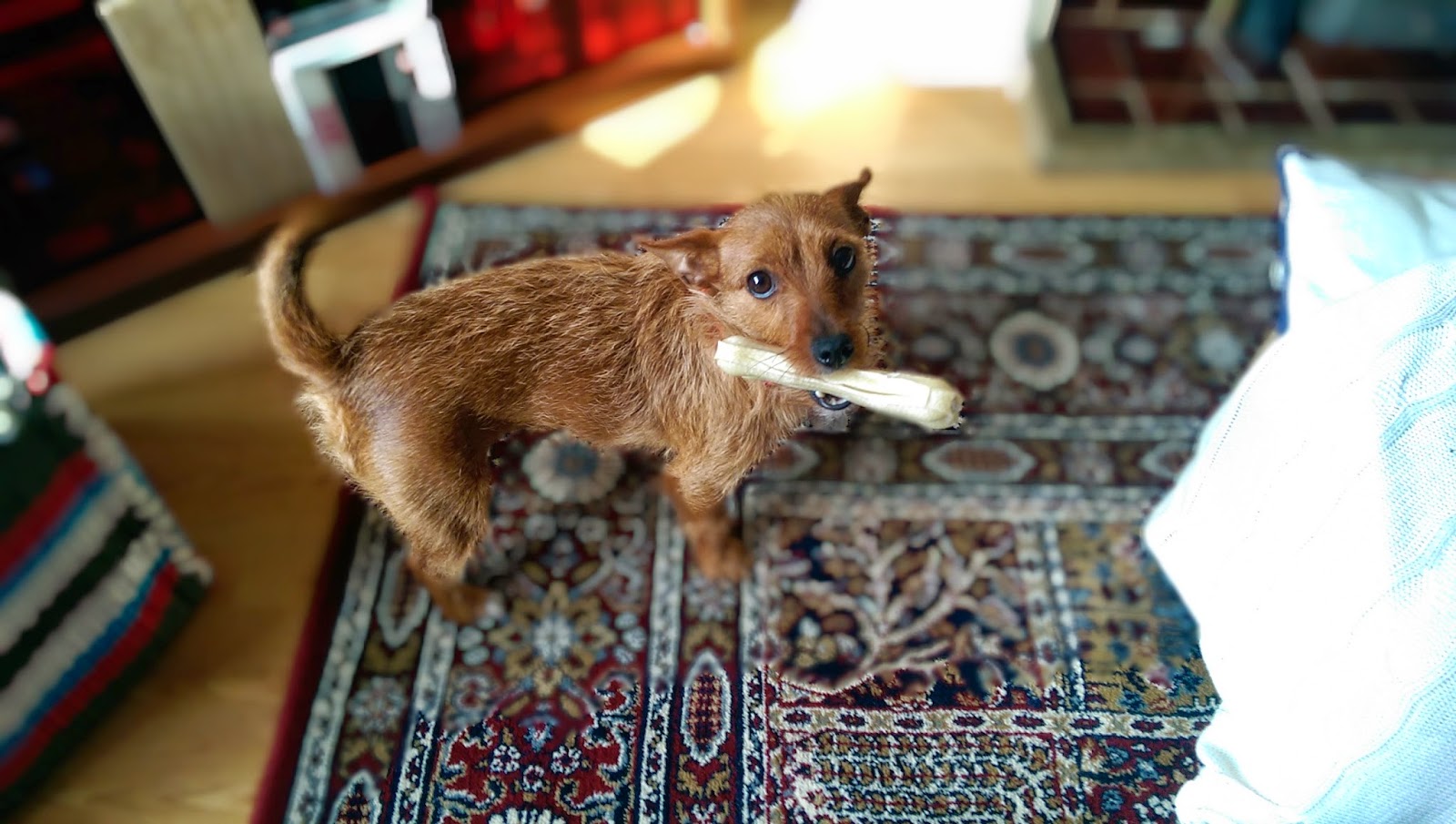 The first day we got her was a nightmare though. She cried during the night and I was extremely unsettled and couldn't sleep at all. To be honest her cry didn't last for long, but it was enough to make me miserable for the whole night. I was twisting and turning fearing that we’re making the poor creature’s life a living hell, which of course is not true. During the first days, we also had a couple of misfortunes when she left us some surprises on the dining room floor. 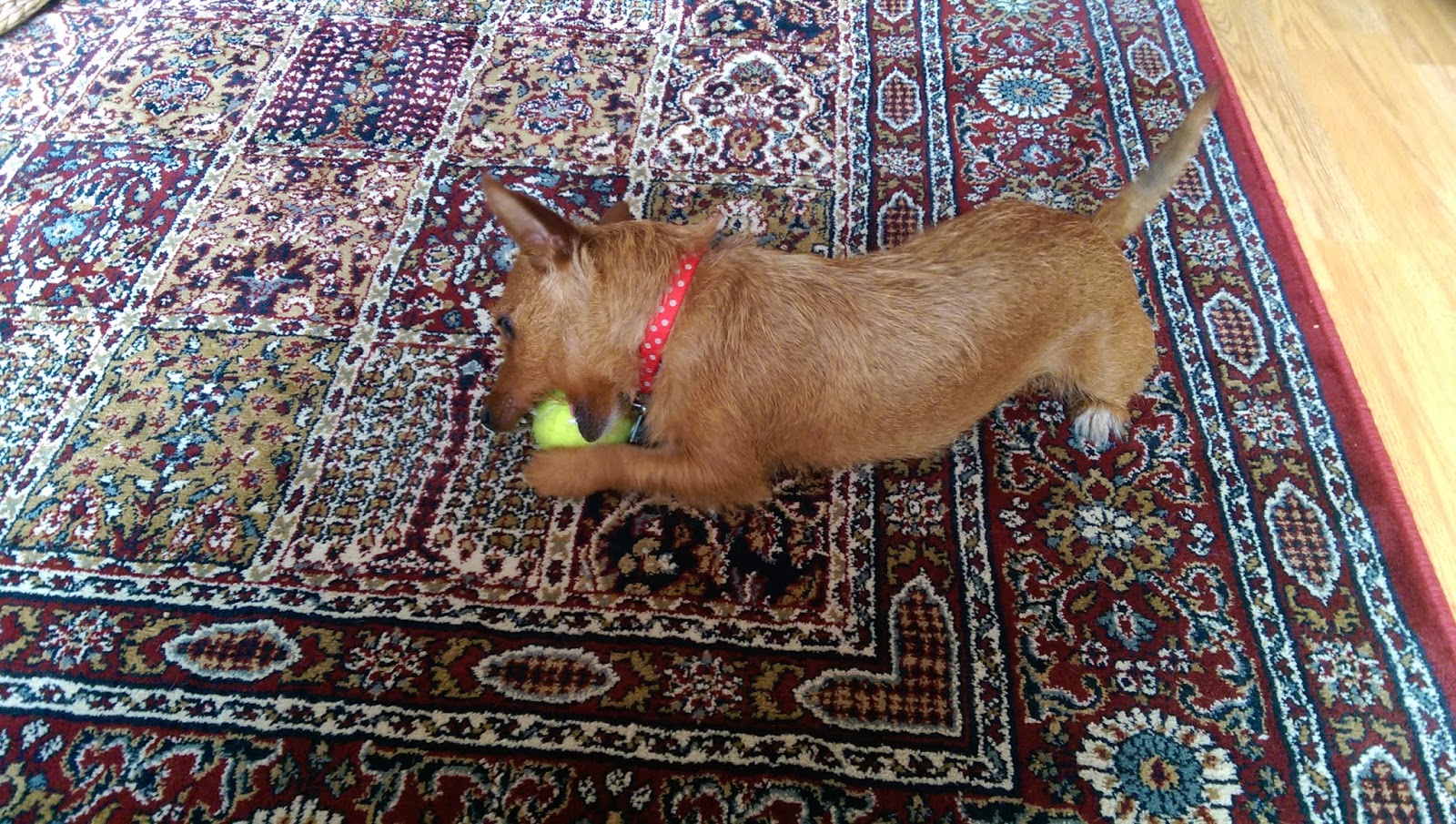 Since then, we changed her eating time and I’m glad to say it hasn't happened since. We’re managing to keep a schedule of long morning and evening walks which occur more or less at the same time of the day.  We’re also adding walks during the way, but these depend on our work and can’t be daily planned. Since she’s not allowed inside shops, we can’t really take her with us when we go grocery shopping or running errands since for the time being I can’t just tie her and leave her outside, it’s too soon. 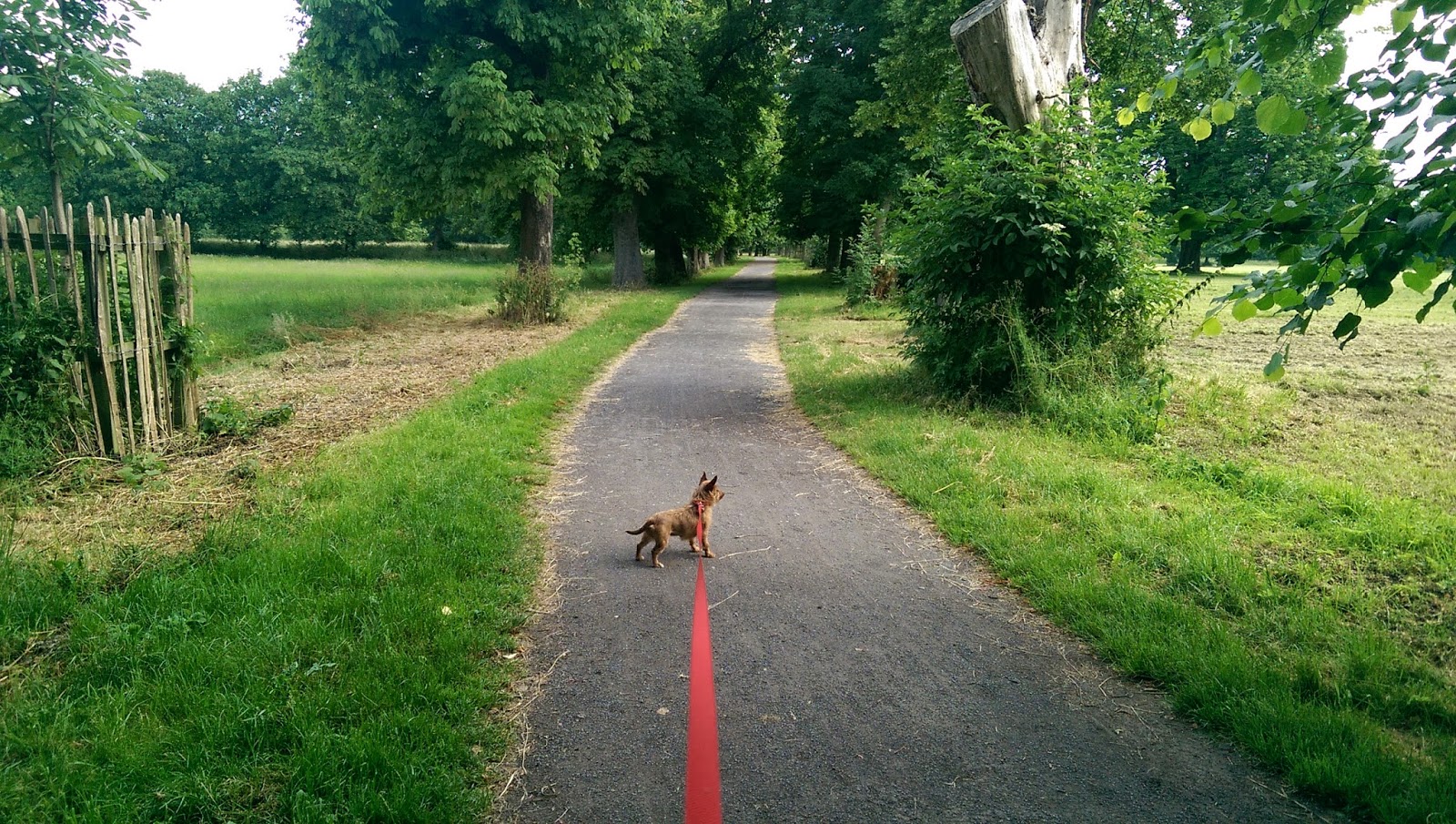 Yesterday night we had a minor incident that we’ll need to look into. Penny woke up during the night when JJ left for work and started crying again. I’m not a happy camper when I’m been woken up like this at 3:30 am. I only managed to fall asleep at 5:20 for 30 minutes before I had to get up to take her for her morning walk. We need to make her a bit more independent.

During the last week whenever we left to go to work there was really no problem. She just watched us from the bay window leave and when we returned she was napping on her cushion. I’m not sure whether she didn't want to be left alone after spending the whole weekend with us, or maybe we pampered her too much. She’s started following us around the house wherever we go again. 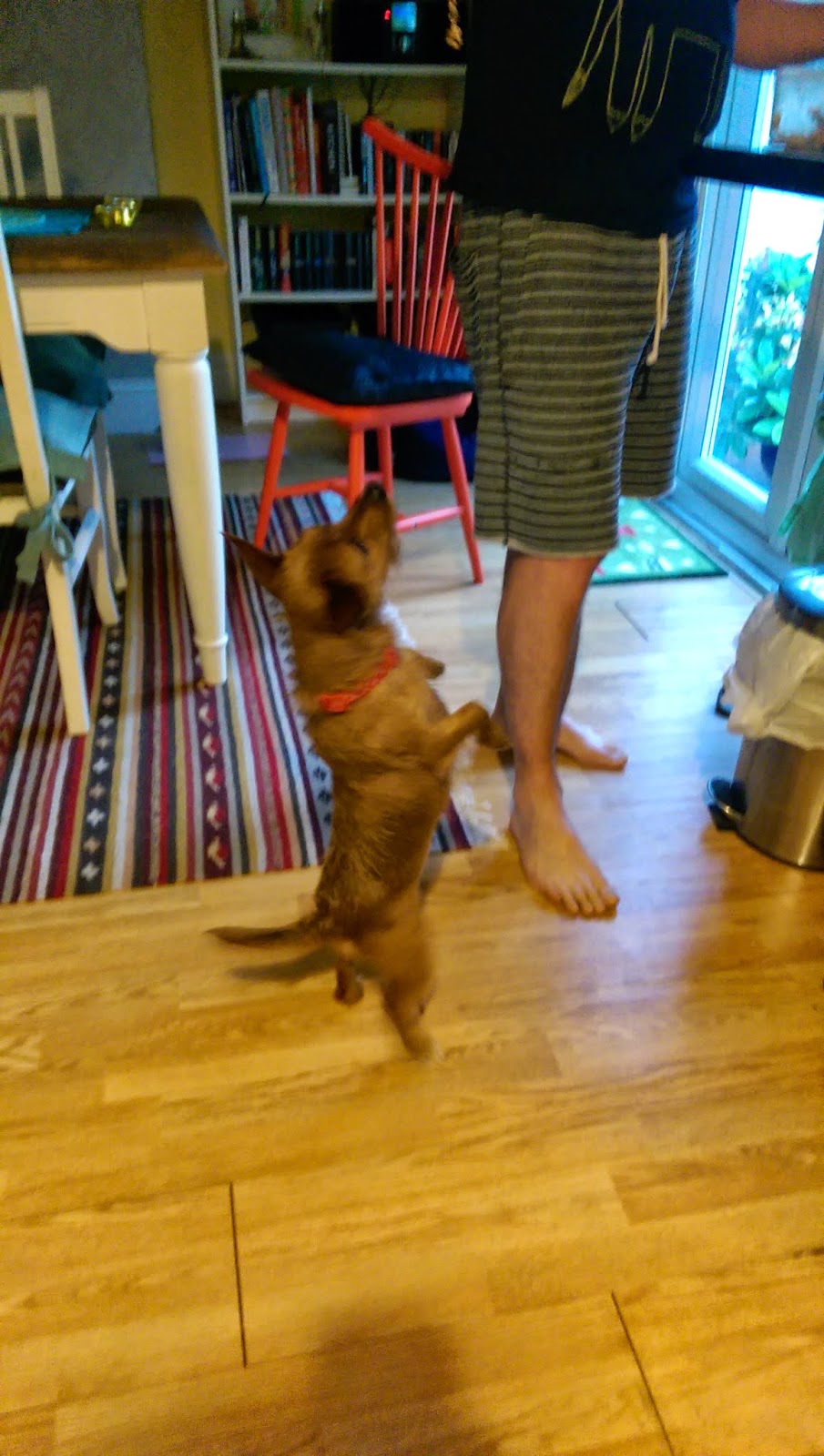 I’m pretty sure we’ll deal with this. I was reading that there is a honeymoon period with rehomed dogs and they tend to taste the waters for a period afterwards. I think she’s now trying to see if she will be given access to our bedroom or to sleep on the armchair. She’s generally not allowed either. We have established some ground rules with Penny that we intend to keep. We fell in love with her but we also need to be firm with her, it’s the whole alpha male of the pact that Cesar Millan keeps saying... 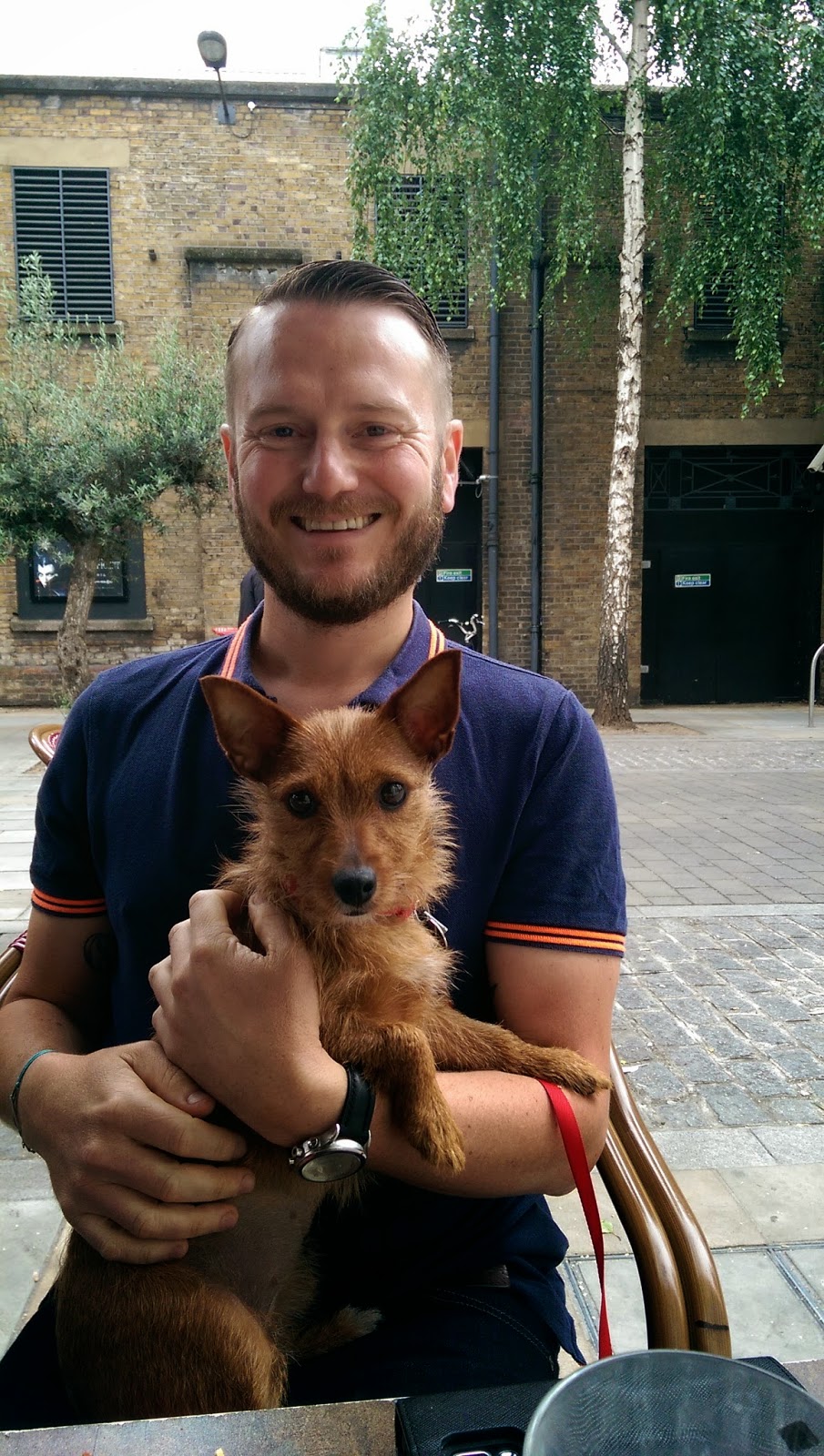 The loves of my life happily having coffee

I have mentioned in the past that we were looking into getting a dog. It was an idea that were discussing in length. At first we mentioned getting a puppy. Then we realised that a puppy has needs that we couldn't meet since we're both working full time. And the decision was made to visit a dog shelter to get a dog. We would preferably look into an adolescent or adult dog, somewhat house trained of small to medium size.

So, two weekends ago we visited the Battersea Dogs and Cats Home. We registered, had an interview with a member of the staff and walked through the kennels. By the time we were there, most of the dogs were already taken by other people. So, we decided to visit the centre again, which we did, last weekend.

On that visit we saw a dog called Bart. He was very cute and happy to get to know us. Unfortunately we were told that his medical examinations weren't cleared and they could take up to some weeks and we were asked whether we’d be interested to meet Penny who looked very similar to Bart and we said yes. As they say, it’s all history after that. 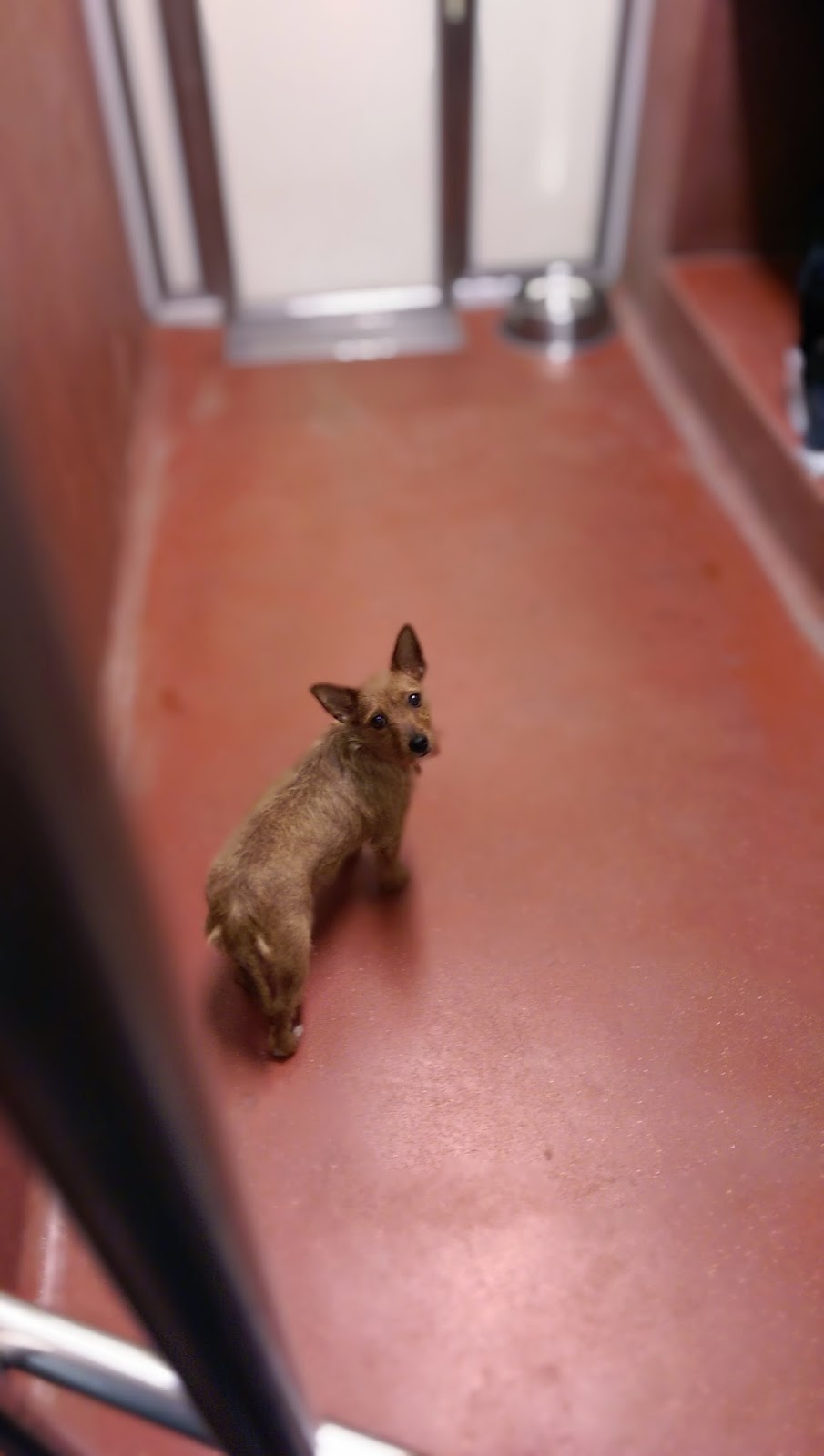 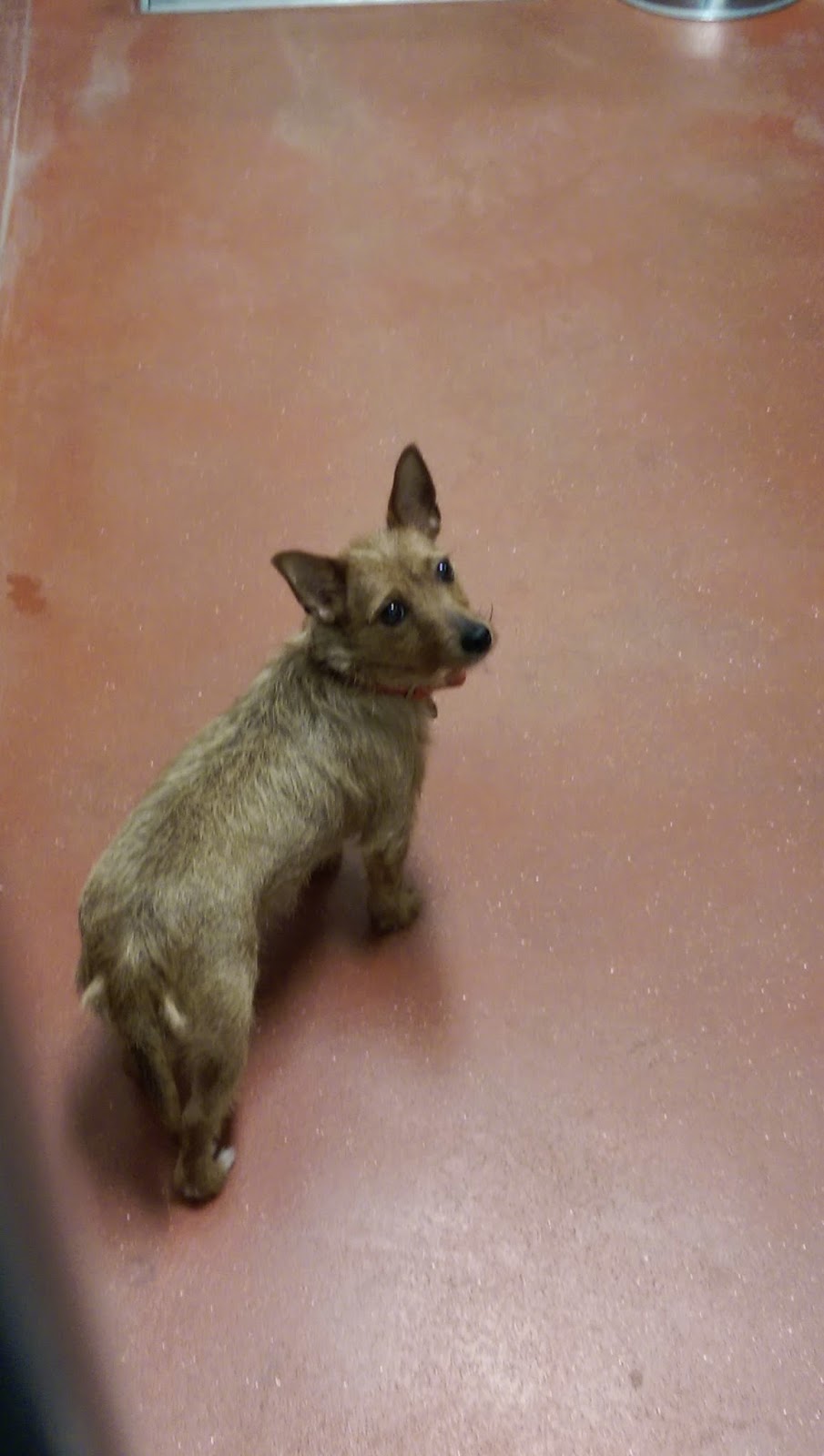 Penny at the kennels

Penny is an 18 month old Jack Russell mixed breed. She was at the shelter for only a few days. One of her previous owners had asthma and the other were expecting a baby and couldn't take care of her. At first we stayed alone in a room with Penny for about 30 minutes. She was a bit apprehensive. She didn't bark at all but was reluctantly friendly. We played catch with a tennis ball and since it was going all well, we went for a walk around the shelter building accompanied by a member of the staff.

It was love at first sight. As we ‘speak’ JJ is picking her up from the shelter. She finished all her medical examinations even dental cleaning, she got a chip and was spayed. I can’t wait to go back home to properly meet her.
Posted by Nik_TheGreek at 13:38 12 comments: